I think I spoke a little too soon about the paltry snowfall.

I had a semi clever idea last night. I quickly realized that once my kids knew that it was a snow day, that they’d be up and in my room way before I was ready to experience them. For a reason that I will never understand, I had to drag their zombie asses out of bed yesterday (and all school mornings) at 7.15, but come weekends, holidays and snow days, they leap out of bed and into my face at 6.30. (This phenomenon is in a category with photosynthesis and the process by which chicken lays eggs that turn into other chickens, and eggs that don’t: Things that I acknowledge, but will never understand.)

“The school sent another email,” I said last night, as I was putting them to bed. “The snow day is being reconsidered due to paltry snowfall.”

“Nice try,” said one of the boys. “You just want us to stay in bed past eight.”

Eight? If all of you slept until eight, I’d call the pediatrician. At this point I would gladly take seven thirty. My trick kind of worked. The boys may have been awake, but they didn’t surface until NINE. I’m certain they were partly convinced that if they showed their faces, I’d tell them the snow day had been called off.

By nine, however, I’d already been subjected to over two hours of three year old, and one hour and forty five minutes of five year old. I’m done, and they’re only getting started. 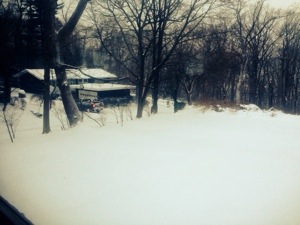