When it rains spray paint, it’s time to go home…

This has been a positively awful news week on both personal and global levels for very many people. At some point I shut off the computer, walked away and vowed never to return. I threw the newspapers directly into the recycling bin without reading them. Still, shitty news has a way of finding you.

I make no secret of my distaste for the word ‘gratitude,’ heck, even typing it made me throw up a little bit in my own mouth. But, I know good fortune when I see it. This week, I’m fortunate to be distracted by a house that needs to be ready for move-in in about three weeks.

While I was ignoring the news this week, I got handy.

PLEASE ignore the heinous green wallpaper and leopard-infused border and focus instead on this brass masterpiece.

I was ready to remove it and throw it up on Craig’s List, when I put this pic on Instagram and asked for advice.

My fabulous friend, S (I promise, if you knew her, you’d call her fabulous too. I do not exaggerate) told me to spray paint it. She directed me to several sites of people who do this sort of thing for fun and then write about it. Do they write about it to inspire or to make the rest of us feel like we have been blessed with a lack of creativity and two left hands? I’ll never know.

My first inclination was mint green, which is, in my opinion, the world’s greatest color. But then I thought better of it. I need something that I can live with for a while. My second inclination was white, which is always my backup. But I was talked into matte black by Bennett, who has an opinion on everything.

Here it is primed: 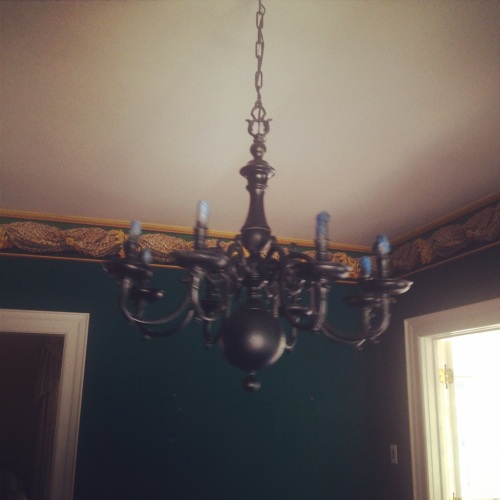 A few notes:
1. Spray paint is not fool proof. For some of us, nothing is fool proof.
2. Do not make fun of your son for accidentally spraying himself in the face with spray paint, thinking he was holding it the right way. This is a sure fire way to guarantee that you yourself will do the same thing minutes later.
3. If you stand under a light and spray paint UP, little bits of spray paint will rain down on you.
4. The building permit guy told me that he once had an unfortunate incident with JUST FOR MEN hair dye and that Sea Breeze removes paint from your face. This was good to know.
5. If you give your boys a can of spray paint each and tell them to have at the basement, you will never be sorry. (If they turn a room into a knee hockey rink and paint HOME AND AWAY on opposite sides but spell it HOME and AWAW, you should know that it is remarkably easy to turn a W into a Y.)
6. I ought to limit the amount of things I do myself. This has always been true.

It sucked to be a Jew in America last week. First, the Pew Research Center came out with a survey of Jewish life and it turns out Jews are assimilating at higher and higher numbers. Apparently, each year fewer people identify as Jewish. If that weren’t enough reason to panic, in the same week, some genius clerk in a store called Hobby Lobby told some Jewish Patrons, in NEW JERSEY, that if they wanted paper dreidels, menorah making kits, and other Jewish-themed craft items, they’d have to look somewhere else, because Hobby Lobby doesn’t cater to the chosen people.

Here’s what I think: If you want to worry about assimilating Jews, don’t get your knickers in a twist about intermarriage, or Hannukah bushes. Instead, I’d ask what the hell Jews are doing in a store called Hobby Lobby in the first place.

Jews are not a crafting people. How the hell do you have time to decoupage a seder plate, knit a cozy for the menorah, or even worse, time to scrapbook a bris, if you always have to be ready to get up and run should a gang of angry Cossacks come knocking at your door? (One of the reasons there wasn’t Jewish art for many years was for this reason. If you’re a nomadic people, wandering hither and yonder, you’re going to pack light. A marble bust of Moses or a wood carving of the sacrifice of Isaac wasn’t going to make in onto the back of your camel or pack mule. Not when you could pack potatoes instead.)

I am not just saying this just because I am an un-crafty person who is easily intimated by the use of any small motor skills. True, I can barely tie my own shoes, and true, anything that I have knit looks like a toddler did it, with her feet, but I am incredibly suspect of the whole crafting business.

I think of all the women who came before me. Would they be horrified to know that it’s now hip to make your own clothes, not to mention bake your own bread? Didn’t we leave all that behind in the shtetl along with that giant pail they schlepped around to milk the cows. (I have a hunch the same pail was used to do laundry and provide the odd bath. Mark my words, people, that pail will make a comeback. A pricey, pricey comeback.)

I am suspect of all this crafting. (I am also suspect of mothers who send their children to school with cute bento box lunches and intricate hair braids in this category. Dodgy.) It seems like such a remarkable waste of time and the accumulation of such a tremendous amount of useless detritus, all so we can pretend that we have an ounce of shiksa-goddess-Martha-Stewart blood in us. People, Martha Stewart is the other kind of Polish, the kind that didn’t have to marry her cross-eyed, hunch-backed, hairy first cousin just because he had a visa and could get her out of Warsaw in a hurry.

We’ve never had the luxury of the time it requires to get busy crafting. (I’m sorry, but I can’t make a boiled wool purse with you tonight. I have to commit the Torah to memory in case the Greeks come back and burn it.) If we have it now, so much so that we’re boycotting stores that are dumb enough not to cater to us (in New Jersey!!), I’d say we’ve gotten a little too comfortable over here. I’d say it’s high time to step away from the glue gun.

And I didn’t need the Pew people to tell me that.

Two hundred and one.

I had big plans for my two hundredth blog post. Each time I post, Word Press congratulates me and tells me what number post I’d just completed. For 200 I was going to bask in some gratitude and thank you all for reading and sharing the posts, and maybe even ask you to share them with one new reader…something like that. Instead, I got caught up in the hullabaloo of “the necklace.” Many of you demanded to see a picture, so I complied. As soon as I posted the picture of the vagina necklace, Word Press shouted out: “Congratulations! You just posted your 200th post!”

Oh crap. I felt like the idiot in all those genie jokes who wastes his three wishes and then accidentally wishes to turn into a pile of shit. There goes my 200th. Now I’ll have to wait until 300. Ninety nine to go.

The vagina business got quite a bit of traction. Some agreed with me about the necklace; others did not. Many found the need to share other things that look like vaginas. According to some of you, there are quite a few people walking around with faces like vaginas. I won’t share names. Oh, and there’s a Godiva chocolate that looks like one.

I myself spotted a V today while at the park.

M thinks I have gone all Sixth Sense on him, because now I see vaginas everywhere, but who can argue with this one? I mean really…

As for the necklace, I tried my hardest to wear it yesterday. Really I did, but it looked all wrong. And I was terrified that some jerk would look at me and say, “Nice vagina.” So I think I may have to return it and just cherish the memories. I still have the story even if I don’ t have the necklace.

It’s the eighth night of Hanukkah, and here is our test tube menorah. 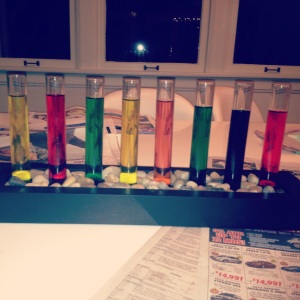 It does sort of remind of shots that were served in skeevy Upper West Side bars in my college days. Not that I drank a single one. But still, there it is.

Even though M wisely pre-poured the food coloring in on the first night (to minimize the chance the kids would try and do it and permanently dye half the house), each night when Bennett took it upon himself to fill a new vial with water, he managed to drip food coloring all over the kitchen.

There’s a lot of sadness all around right now. My heart and mind are consumed by thoughts of those little first graders, children Francie’s age, and the gaping holes that were left in each of their families. I suppose if eight nights of oil (or food coloring) was a miracle, so is each day.

It seems Bennett has found an apprentice in a sweet little boy in Francie’s class. The boy’s mother texted me this picture — her little one seized an empty toilet paper roll and announced that Bennett had taught him a great trick. 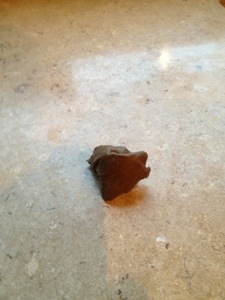 Look familiar? He must have heard about this. All my hard parenting work, and this is our lasting mark on the neighborhood: fake turd from a toilet paper roll.